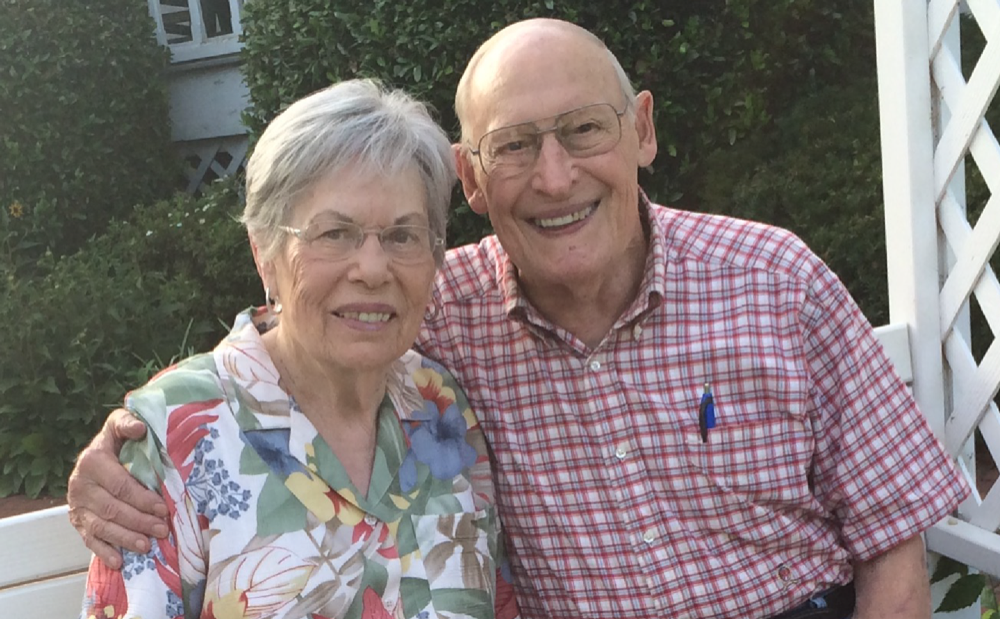 The Legacy of Dr. Hoyle and Mrs. Lucille Bowman

“OK, class!” Two words that are etched into the minds of the thousands of students who sat under the teaching of Dr. Hoyle Bowman. For fifty-one years, Dr. Bowman taught Bible and Theology at Piedmont International University. Every class that he taught began with this simple greeting. The teaching of God’s Word that followed was the outcome of a love for the Lord Jesus Christ and a mind that faithfully studied God’s Word.

Hoyle Bowman grew up in Granite Falls, North Carolina. As a young man in 1944, he left to serve his country in the Merchant Marines and in the United States Marine Corp. After his military service, he came home and married the love of his life, Lucille Seitz, on July 8th, 1949. This was the defining moment in his life. It was through the direct influence of Lucille that Hoyle accepted Jesus Christ as his Lord and Savior in September of 1949. He was baptized on Christmas day of that same year. It was during this time that Hoyle was called to Christian service under the ministry of William Walter Marr, pastor of Calvary Baptist Church of Hickory, NC and under the influence of Dr. Earl Griffith of Piedmont Bible College.

For the next several years, Hoyle and Lucille lived in Orlando, Florida, where they were able to successfully plant Sky Lake Baptist Church. The ministry grew rapidly under the faithful preaching and teaching of God’s Word. While serving in this ministry, the Lord burdened Hoyle’s heart for teaching. After reaching out to several schools about potential opportunities, the Lord directed Hoyle and Lucille to return to Piedmont Bible College.

In 1965, the Bowman family moved back to Winston-Salem. For the next fifty-one years, Hoyle Bowman served as professor of theology. While serving in this role, Hoyle earned his Doctorate of Theology degree from Grace Theological Seminary in Winona Lake, Indiana. One of the hallmarks of his teaching was consistency. Having been educated under some of the best theologians of the time, Dr. Bowman’s teaching reflected all that he learned at Piedmont, Dallas, and Grace. Systematic Theology, Dispensationalism, and Eschatology were the areas of his expertise.

Lucille Bowman served along side of her husband through every step of their journey together for nearly sixty-seven years. She faithfully walked by his side through church planting, many interim pastorates, mission trips, and fifty-one years of teaching. She loved working in Piedmont’s library, assisting students with editing and typing term papers, as well as working in the school’s cafeteria where her smiling face greeted students for many years. Students, faculty, and staff of the school were blessed by her Christlike example and wise counsel.

Dr. Hoyle Bowman influenced thousands of Piedmont students through his Christian example and faithful, consistent teaching of God’s Word for fifty-one years. His teaching has been passed down to countless others through the many pastors, missionaries, and other servants of Christ who sat under his teaching.

It has been said that without Lucille’s Christian life, testimony, influence, love, and support there never would have been a Dr. Hoyle Bowman. They both came from humble backgrounds, but the Lord used them to influence generations of students at every level of academics. Together they served the Lord for His glory! Now that Hoyle and Lucille are in heaven, that influence continues through the legacy they left behind. Their impact on Piedmont International University, now Carolina University, is without measure. The extent of that impact will only be revealed in what Dr. Bowman would call the big “E” – Eternity!